At the time of writing I'm in a café in Vík, terrible weather with almost zero photographic potential, so might as well update you guys with news from the first leg of my solo journey through Iceland, which went from Krakatindur to Landmannalaugar. 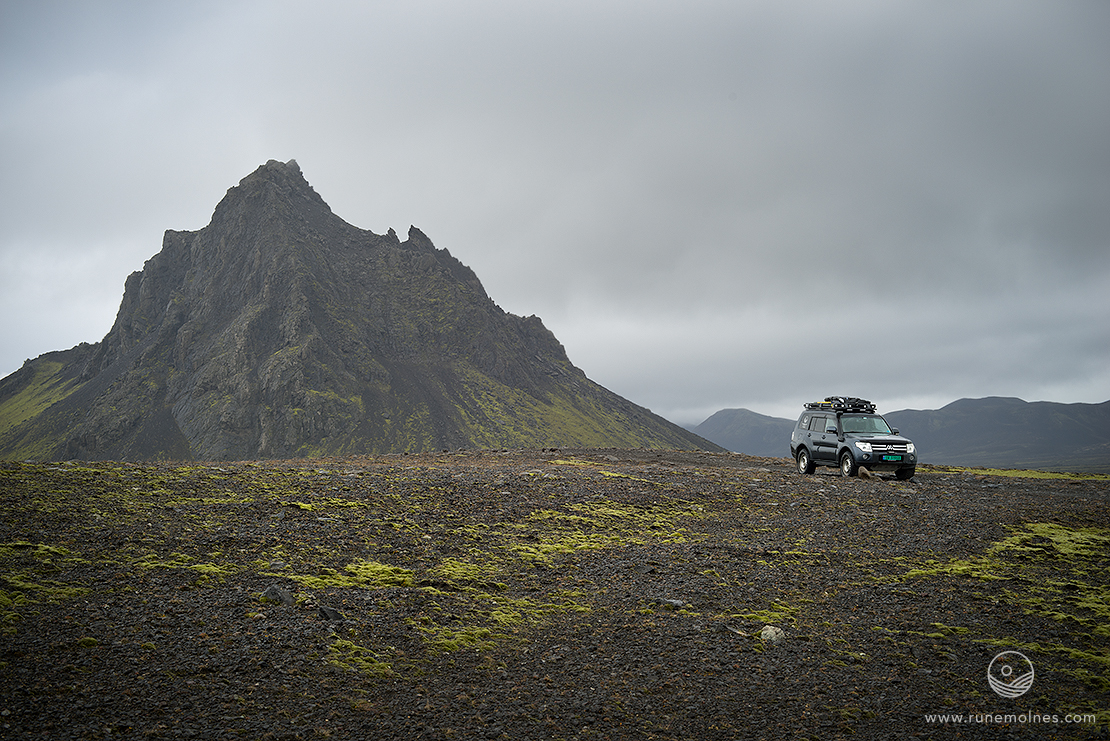 The landscape in this area is pretty spectacular and fun, semi- difficult driving too. Back at Aron Reynissons cabin we had been browsing some pics on the web, where we found an interesting photo of a lake which looked like a red eye. Since I was heading for Raudasfossafjöll anyway, I decided to look for it.

First day at Raudafossafjöll (Red Falls Mountain) it was cold, windy and raining. Glad I brought my Fjällreven poncho with me. I went up in the mountains looking for the mystical, red eye of Rauðifoss. Up there I managed to snatch a little bit of cellular coverage, just enough to call Aron and ask where this eye could be found. "Up in the mountains, where the water comes from" – that's all I got before our conversation was cut off. For any good Norwegian, a mountain means a high, preferably pointy one, except for the Molnes mountain, which – too be honest - is more like a hill. So I set my sights for the highest peak, where there also seemed to be coming quite a lot of water from. With 20kgs of photo gear, and steep sandy slopes, this made for a very strenuous walk. 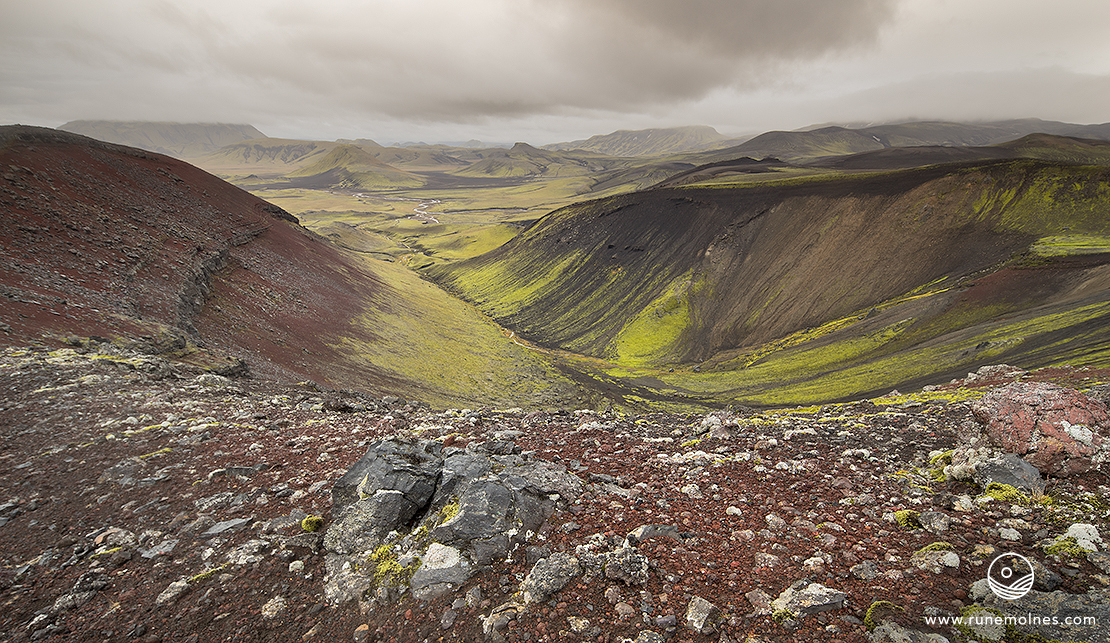 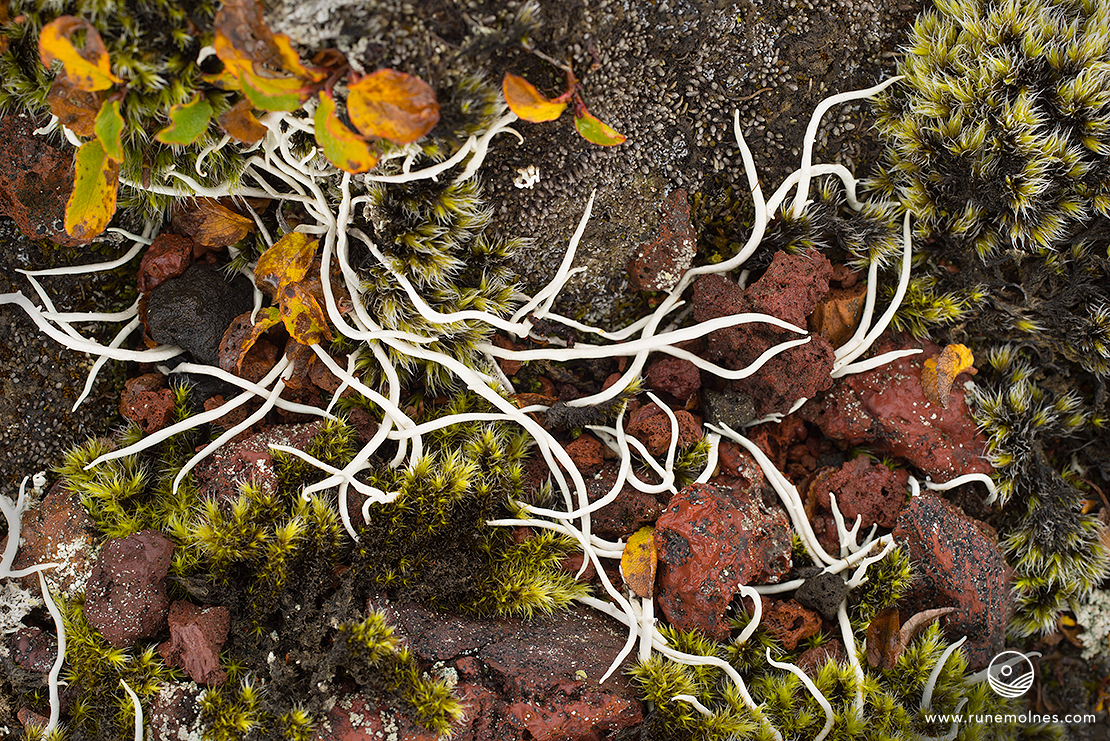 On my way up, I dreamt about how this lake would look like in my finished photograph. Up every small ledge where water was coming from I built up high expectations only to be let down every time. Almost on the very top of the mountain, I came to the final stream, a puny little stickle running out from under some ash, mocking me as it hurdled down the mountain. Just me and a couple of sheep to be found up here among the clouds, they were looking at me casually, like asking me what the hell I was doing up here.

So I headed down again examining every stream I came across, turns out that there was a lot of them, weeks' worth of stream- chasing. It did cross my mind that Aron might have pulled a prank on me. In any case I consoled myself with the fact that I already had created some decent, collateral photographs. This first day I shocked my body with 10 hours of constant trekking in the mountains. Well before I returned back down I had run out of food and my headlight was back in the car – which meant I was navigating by GPS only to find my way back. 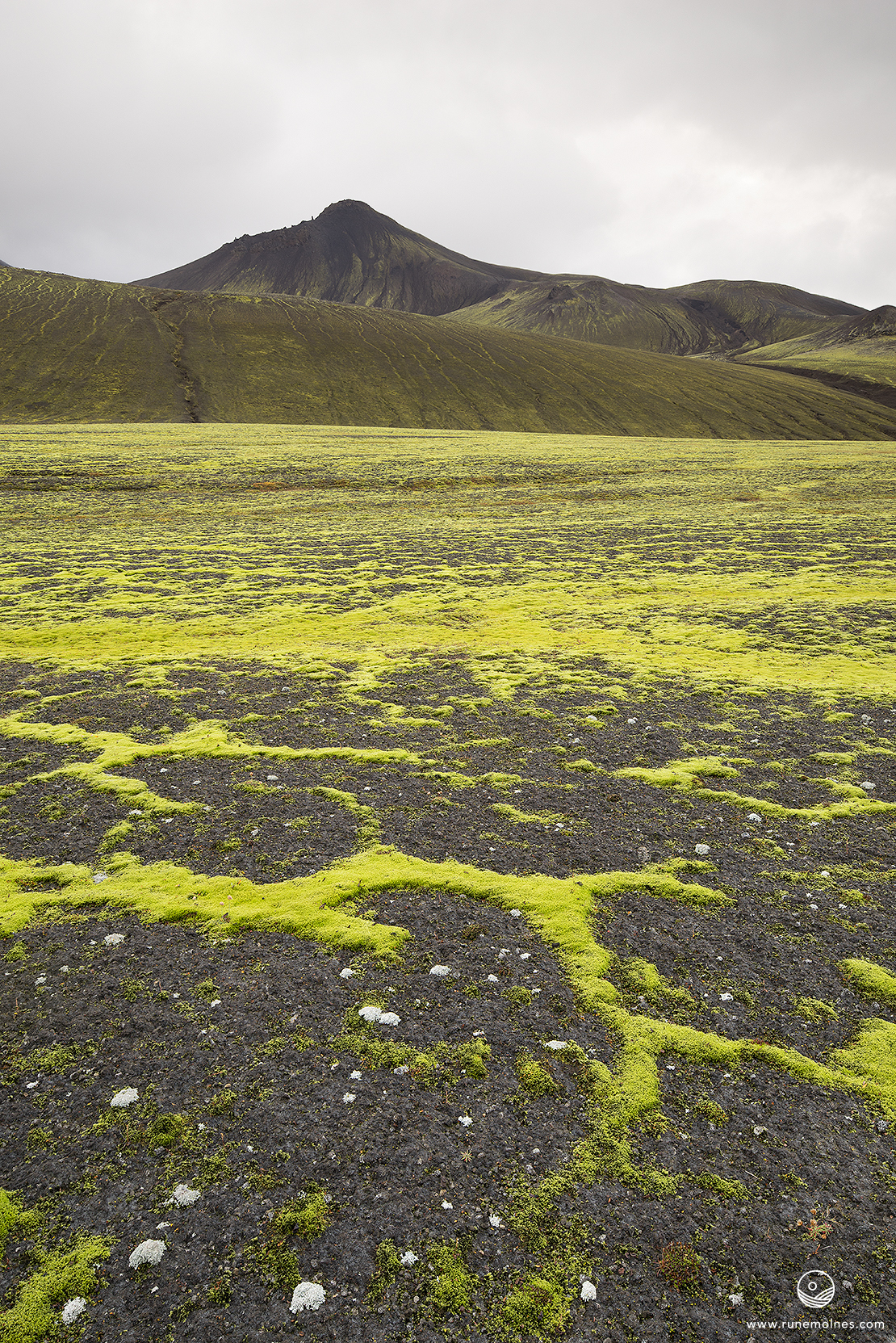 The next day, same weather and back up the mountain to go looking for the eye. By now it had become somewhat of an obsession. This time I set forth in a more systematic fashion, starting at Rauðifoss and walking upstream. I then followed whichever branch had the reddest river bottom, and worked my way up. Same story this time, only without the sheep. After about 7 hours of walking, I turned back down. I had really hoped that this time would be one of those instances where persistence mixed with stubbornness would be rewarded. Not so, it seemed. On my way down, I was singing my own parody song about my futile quest for the eye of Rauðifoss. Having quite fun with it to actually. Then I came to a new cross-road in the maze of streams. This one looked very promising, very red and very much like how I had pictured it would look like. It was getting dark by now, windy and very moist. But I thought what the hell, might be the only one I have not checked out by now. As I followed the stream upwards I came to this location. Like something out of a dream. The working title is "Uten tittel IV", by lack of any other name for it. I really had to struggle with this one, since rain was soaking down my filters in an instance, and wind was so strong that the tripod would not stand still. Really happy with the result, and I am quite sure that this photograph will find its way to a gallery in Norway soon. The photo has a true, dreamlike quality to it and the water on the filters add to this, giving it a selective, vignette of watery blur which no digital filter could mimic. Of course difficult to tell from this small jpeg but it will look very good in a 50x100cm print. And no, I did not fiddle with the colors. 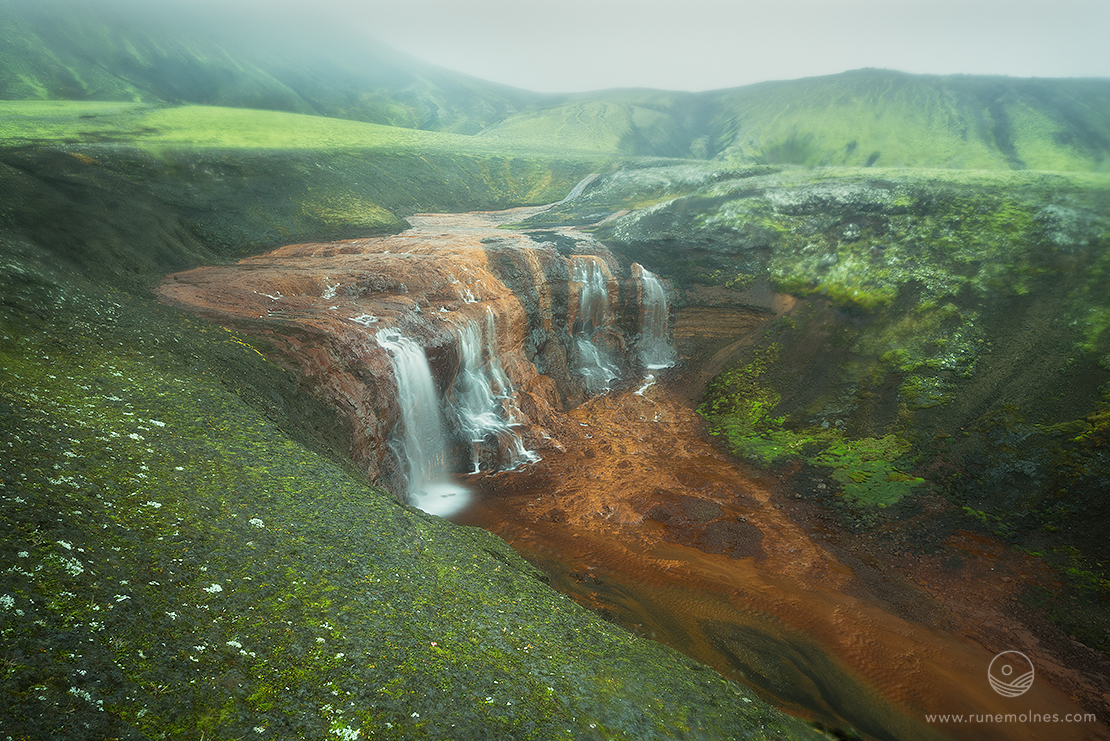 It is difficult to tell from the photo above, but there is a spring just above the falls, which feeds it with water coming up from the ground. From afar it looks like any large pond. However, by now my expectations had once again risen to great heights. Only this time I felt confident that I finally had found the eye of Rauðifoss. Persistence did pay off, and I felt great about finding it. Again, quite a struggle, but happy with the result: 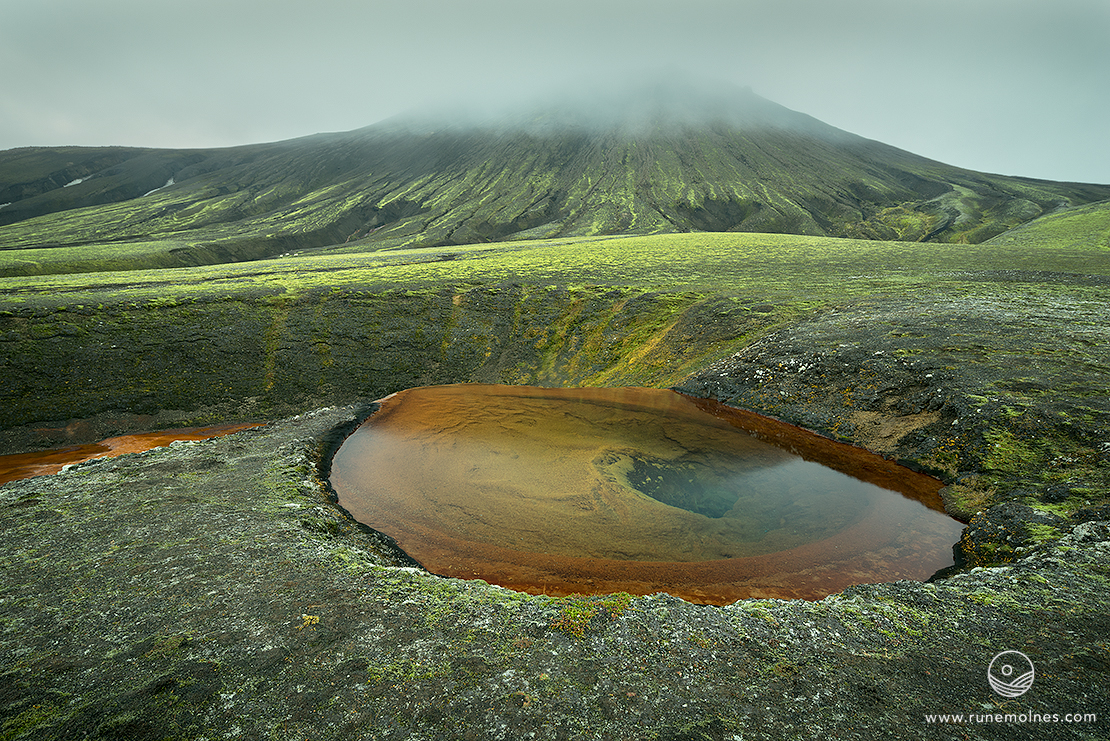 After two days of trekking, I went straight on to a third, full day of trekking in the mountains of Landmannalaugar.

The plan was to walk up Jökulgil valley to the Torfajökull glacier, but I went into the wrong valley, thinking I did not need GPS and quite sure it was the right one since it curved just the way it did on the map. However, it soon stated to twist in ways it was not supposed to do, and narrowing in more than expected. 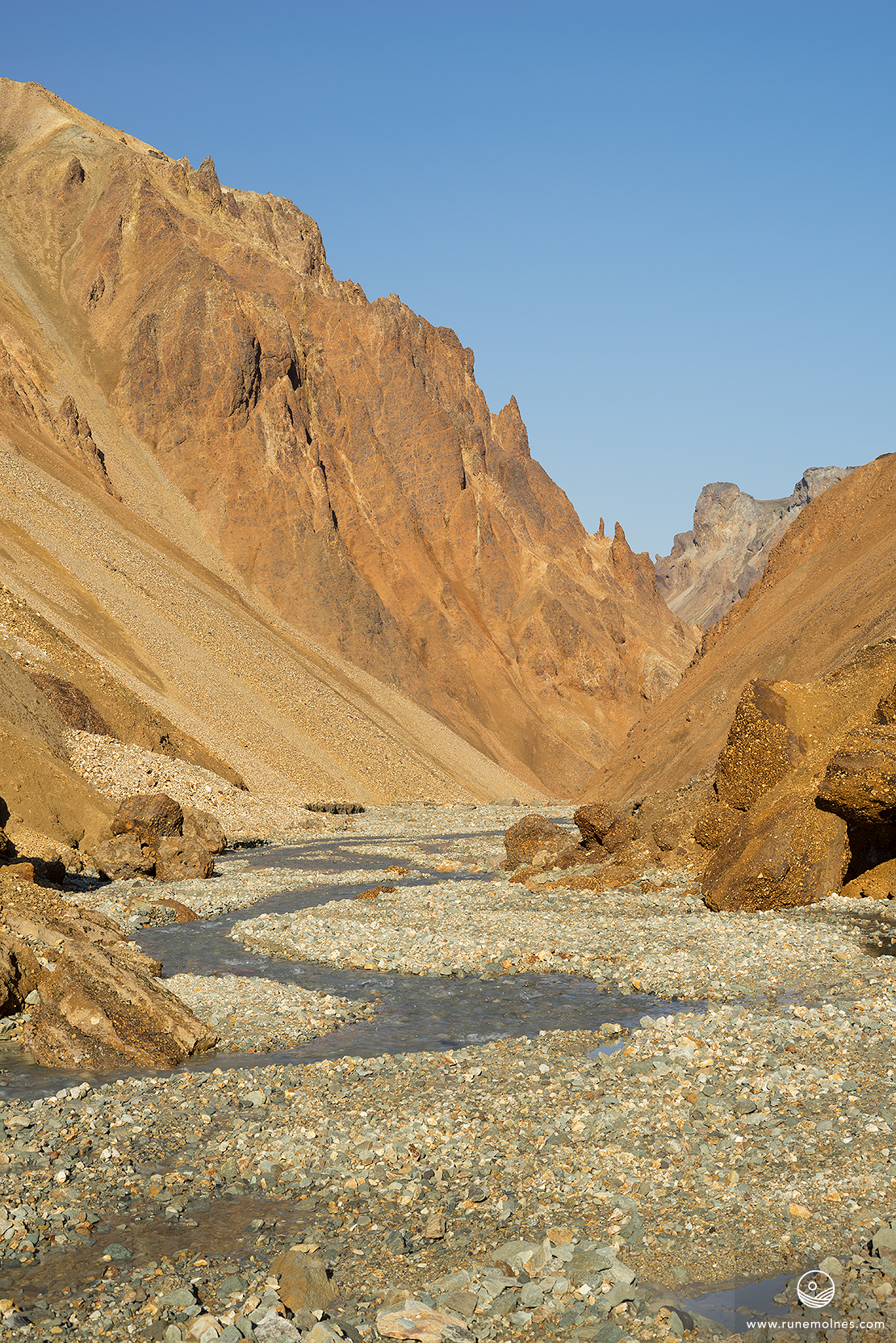 After some hours a glacier was blocking my path, with a small river running out of it. It looked structurally very sound, so I continued on, on top of the glacier. By now the valley was only 6 m wide, with high mountains rising up on each side of me. Already feeling a bit exposed up on the glacier, I found myself in a situation where I had rocks falling down everywhere around me – whizzing by like projectiles. Turned out that there was a small flock of sheep running up in the near vertical mountain- side, being rounded up by two men and a very courageous sheep dog, following in their path. I decided to make a run for it. By then the oldest one of the two men had noticed me down in the valley – probably thinking. "Damned tourists – even in the off- season". As I came to a crossroads in the valley, one of them shouted "Please! Stop!" And so I did, for a while.. Since I saw they were chasing some sheep up the same gorge that I was planning to climb, I thought I might as well help them and start climbing up. Turned out that there was two very tired sheep that could not make it up the gorge, so I had to hide again until the sheep passed down. I got to exchange a few friendly words with the older gentleman, as he came running down a near vertical hillside together with his dog. He had walking stick in hand, with his Icelandic sweater in a knot around his waist. Very fit for his age. I am sure that these two guys must be the toughest and best sheep herders in all of Iceland. Old school guys, running across hills, not just sitting in their jeeps driving up the river like most of the other guys were doing.

After yet another whole day of misguided but eventful mountain trekking, I was back in the Landmannalaugar camp. I had heard rumors about wild parties after the rounding up of sheep, so I had high hopes for proper booze-up with the locals. Lingering for a while, making some food and organizing the back of the car, I concluded that nothing special seemed to be happening in the near future. In addition a small camp of loud, young Americans had camped right beside me, so I headed out to have some peace of mind and a good night's sleep.

Below you have a picture of the sheep being herded out of Landmannalaugar the next day. See the guy with the stick in hand? I am quite sure that this was the guy I met in the gorge the day before. 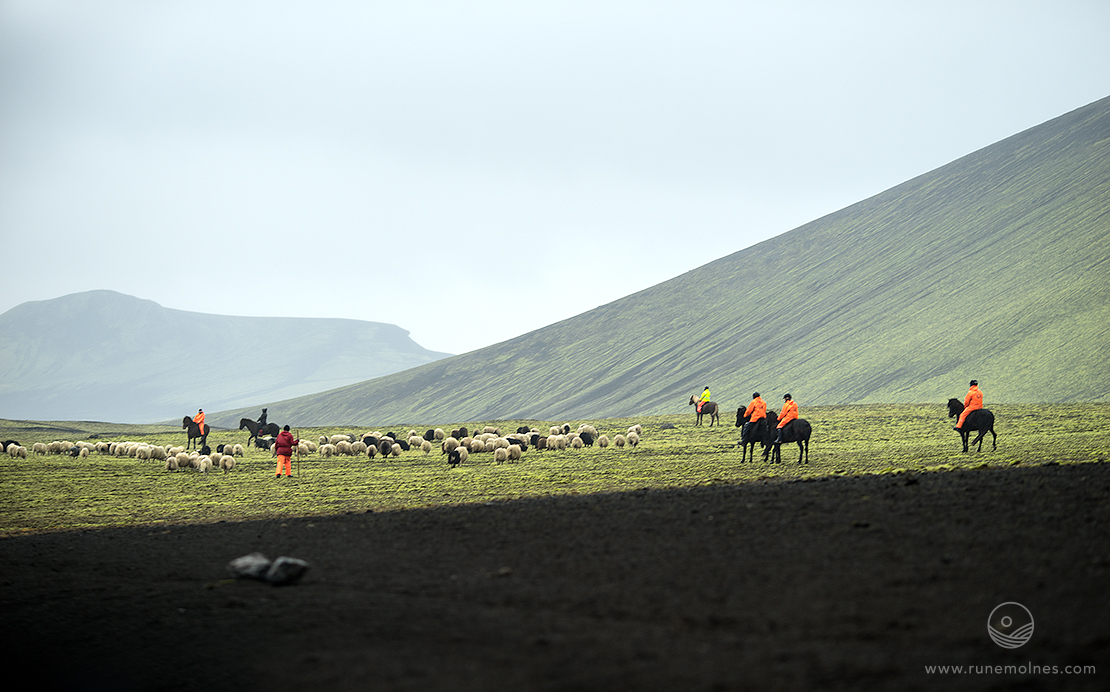 I was planning to return to Landmannalaugar this day, since the photographic outcome of the previous day was rather meager. You might say I was saved by the bad weather, so instead of a fourth day of trekking, I headed for Langisjór further up north towards Tungnaárjökull.