Hordes of ardent readers might just remember me writing about lovely Erkna Island before. For those in need of a recap, I have posted links to the two previous Erkna- visits in the bottom of this entry.

During my trip to Erkna Island earlier this year I experienced what might be called a epic anti- climax when faced with the enormous piles of plastic waste. It felt plain wrong to pick plastic bottles out of the frame, or to change camera- position in order to tell a tale of rugged, vast, unspoiled nature. So I was compelled to do something about it, if nothing else make a few souls aware of the problem through my journal and social media.

Long story short, Gjertrud Hustad read my journal- post about the problem and started applying for government grants in order to finance a clean-up operation. Surprisingly none such funding ensued, despite the fact that the island has been deemed an official nature reserve for seabirds. Birds that are currently swimming around in an ocean of plastic waste in their nesting sites on the island.

We ended up gathering a few dedicated people for one fine weekend of picking up litter on Erkna. Personally I was fortunate enough to be accompanied by my brother and my two boys, Ulrik (6) and Sondre (9). Both of which are passionate environmentalists. 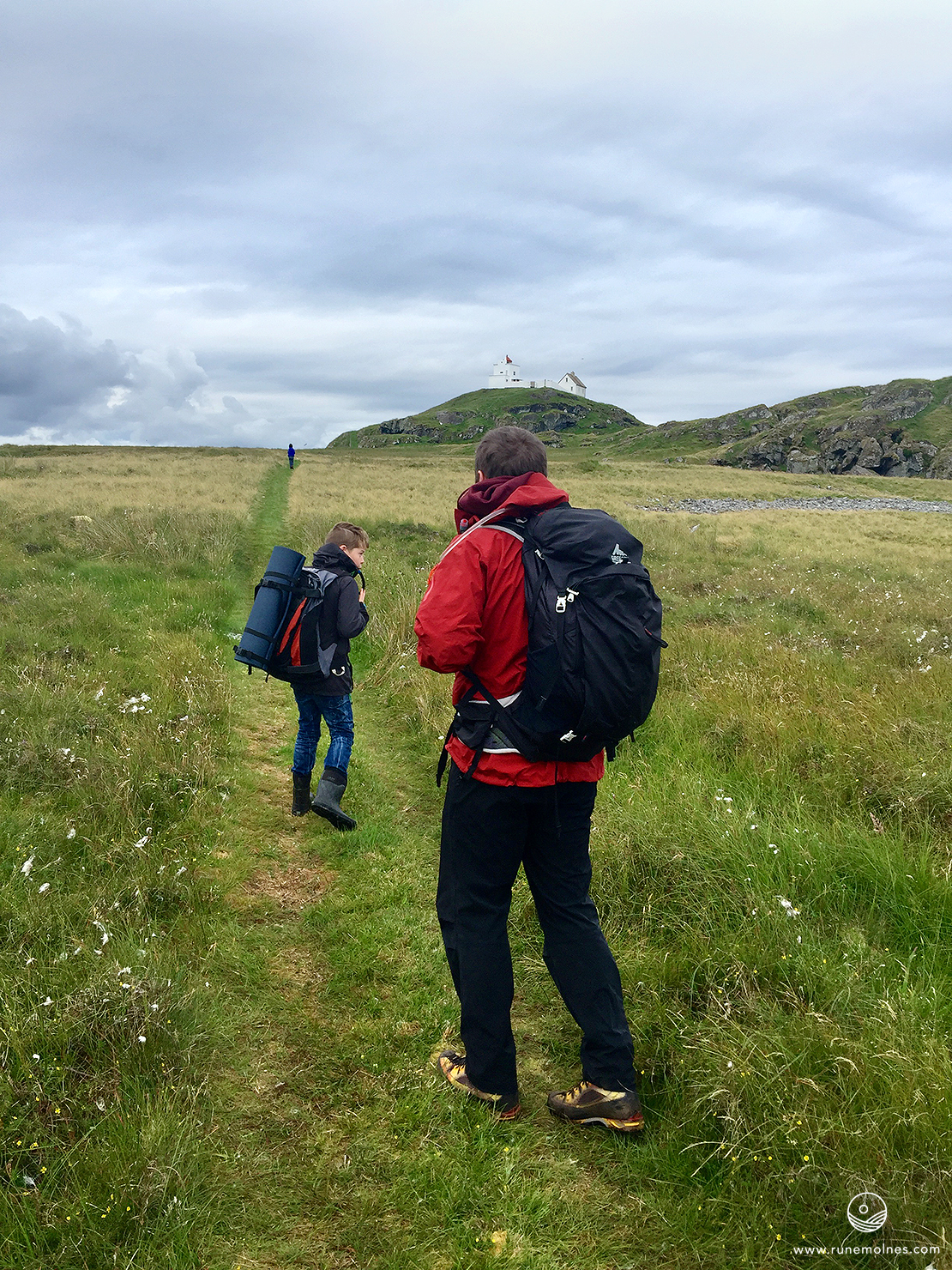 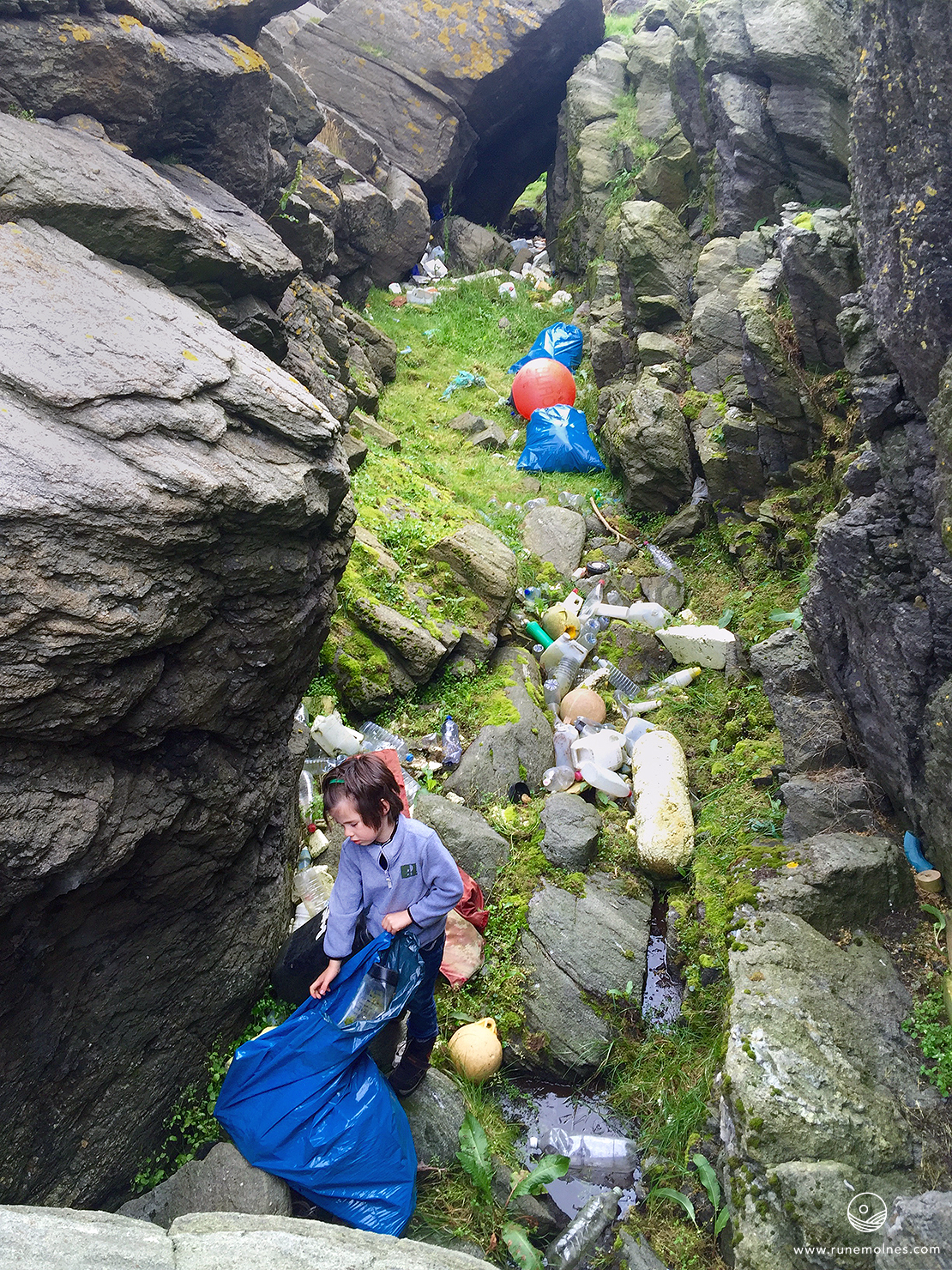 Just before I shot the picture above, Ulrik (6) had a sit- down to contemplate, seemingly feeling a bit of despair: "Dad, shall I tell you something? All this mess makes me sad. Why can we not take better care of nature?" Well, I could not agree more.

In several of the nooks and crannies to be found on Erkna, we were met with similar amounts of plastic litter. In this one alone we picked up twelve full plastic bags of junk. When teaching our children about humanity’s impact on the planet, I believe that it is important to also put emphasis on the fact that something can be done about the problem, and to point out the areas where there are positive developments. Like France and Morocco’s ban on plastic bags, the rapid developments we see within solar energy and other renewable energy sources, developments of biodegradable wrappings etc. 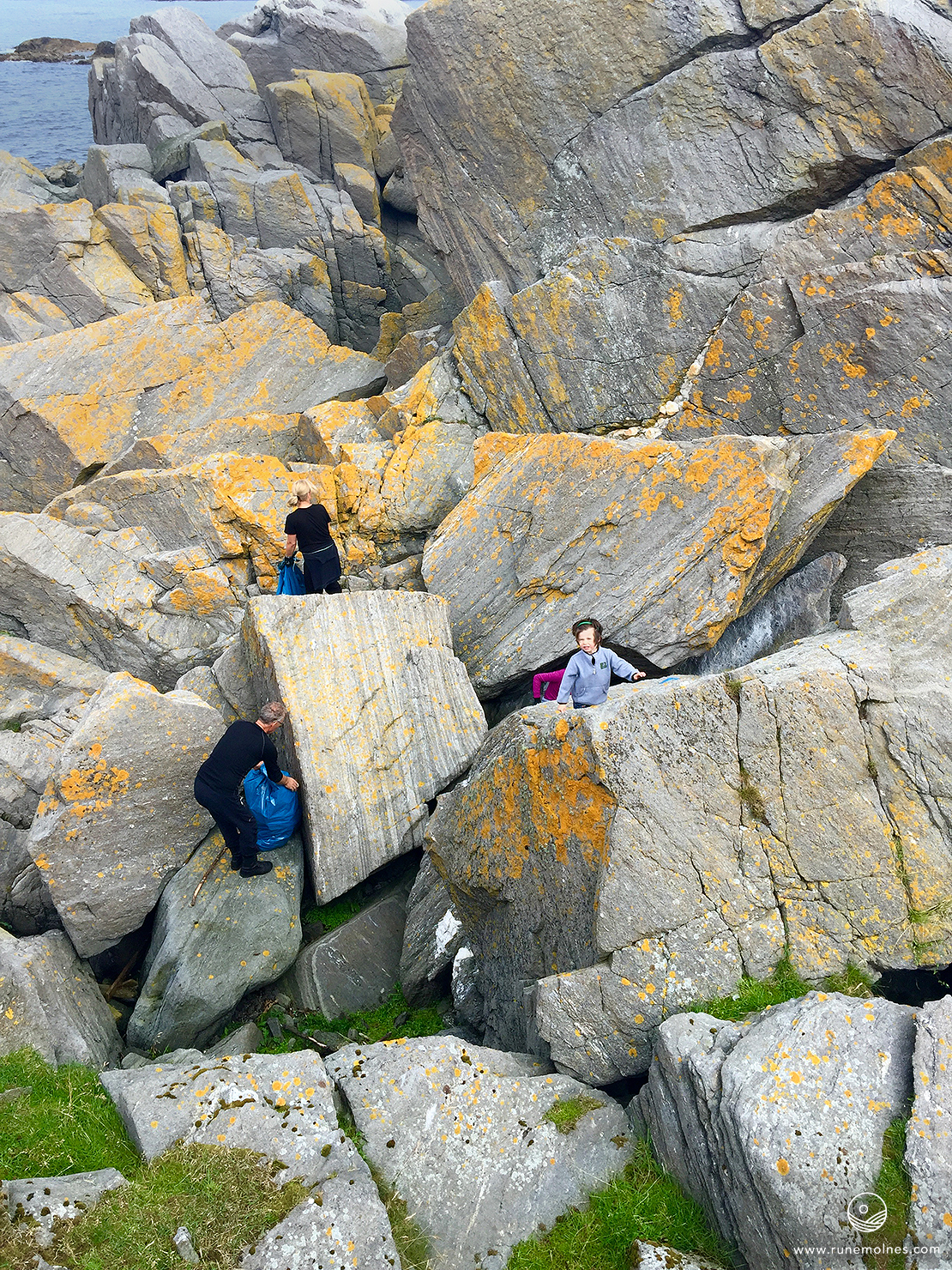 Above: Not exactly easy pickings, but a bit of climbing was fun both for the young- and the older kids. 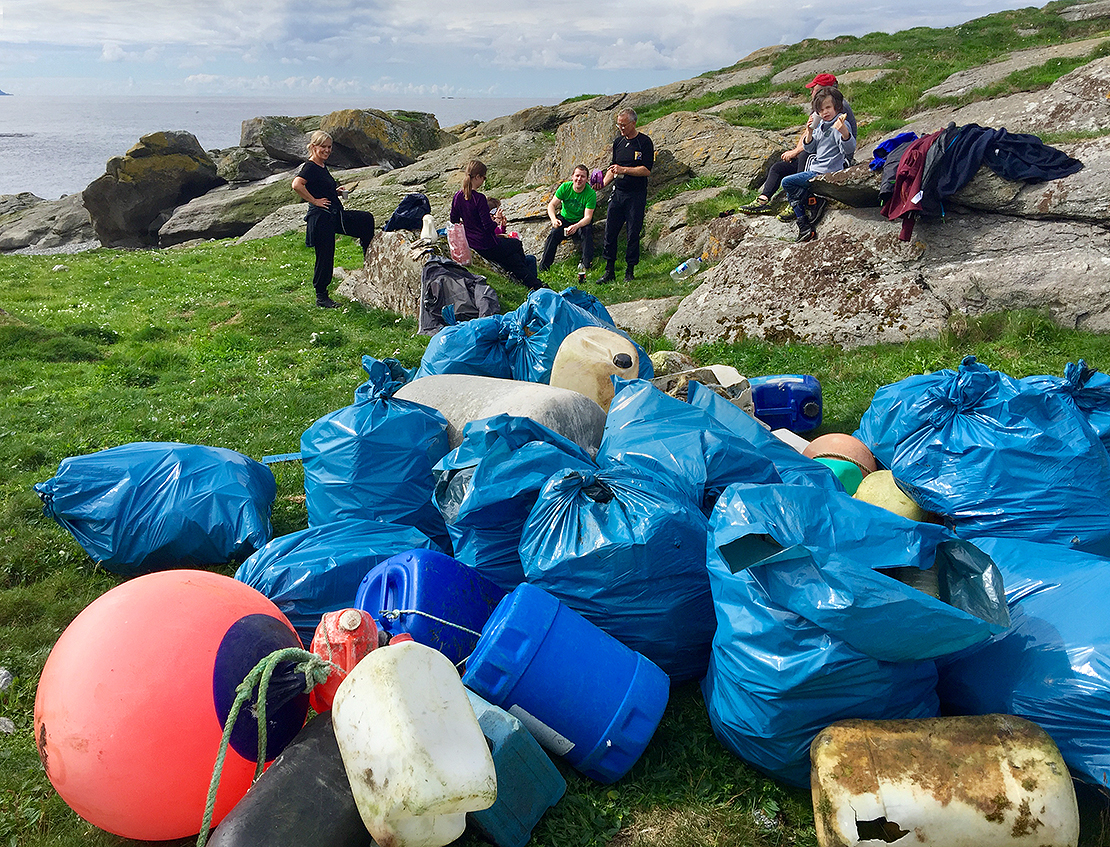 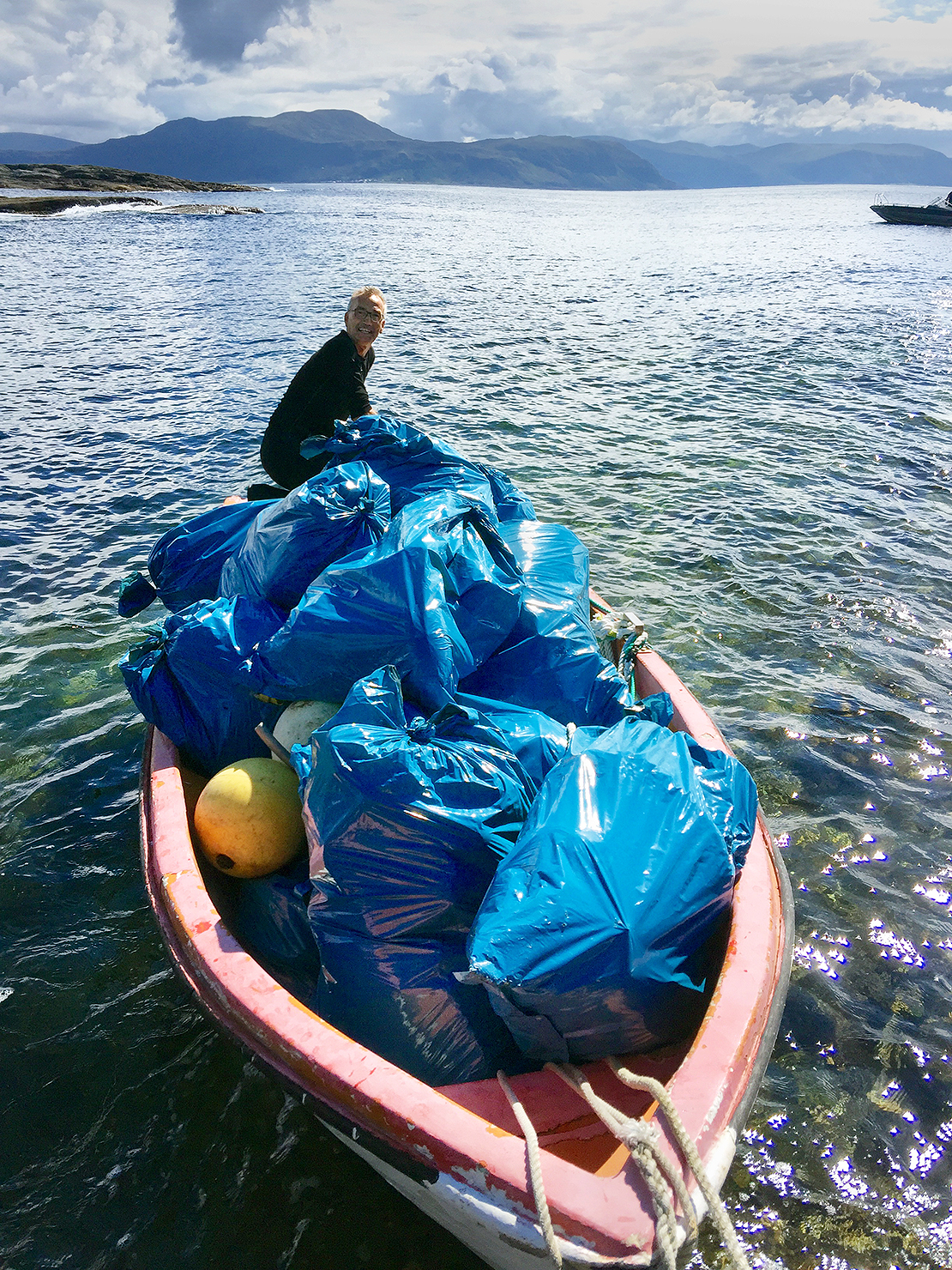 Geir-Egil Gidske, warden of Erkna Lighthouse, transporting one of many shipments of thrash from the West-side of the island, to the East-side where it hopefully will be picked up by helicopter and transported to the nearest waste disposal facility on shore. 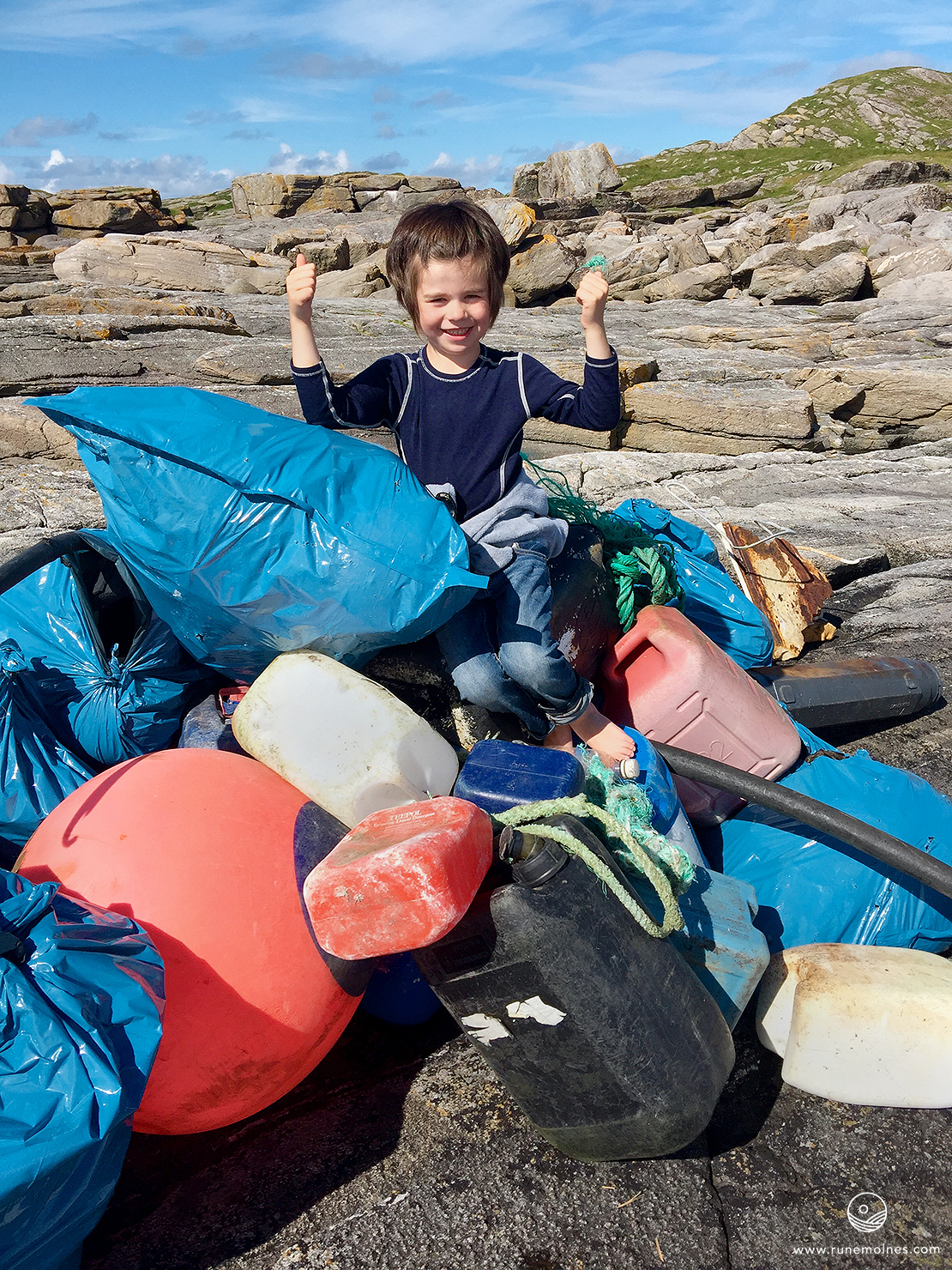 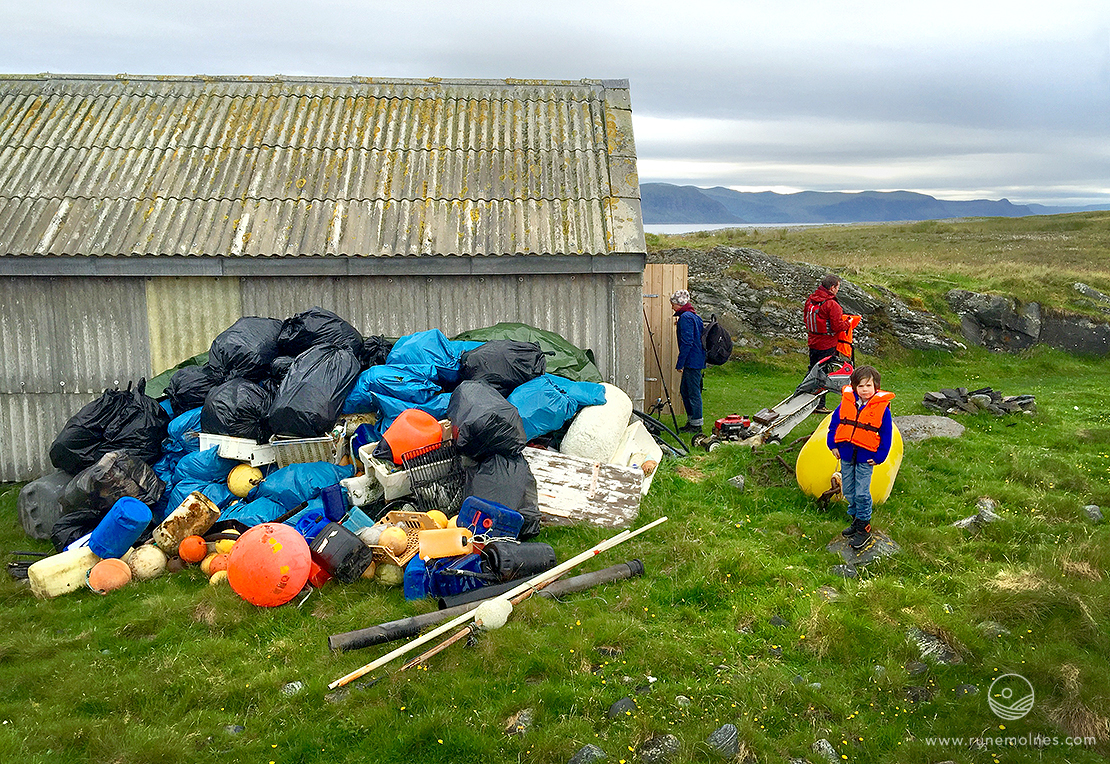 Above you have all the junk our band of seven people collected after one day, in addition to some plastic bags a local pensioners’ club collected some days earlier. A week later Geir- Egil and his wife collected another pile of thrash almost as big as this one. My estimate is that here is, at time of writing, at least as much junk left on the island, as we have collected thus far. Geir-Egil says that he plans to clean up the rest of the junk singlehandedly. Hats off to him!

Only problem is that much of the thrash is tucked well out of sight, in piles between huge boulders on the west- and north- side of the island. Erkna Island acts in a way as a big ocean- filter, or collector of seaborne plastic trash: During storms, plastic waste is deposited between the boulders, without returning to the ocean. The problem with this, is that the plastic deposits function as a big microplastic- factory during bad weather, grinding away between the rocks and finding it's way into our oceans and the food-chain. Picking up trash at the little island of Erkna can sometimes feel like a labor of Sisyphus, but hopefully Geir- Egil will be able to keep the level of trash at an managable level now by regular, smaller cleanups like he has done so many times before.

If you would like to help out and volunteer to a small clean-up effort on Erkna, please contact Gjertrud by sending her an e-mail to: gjertrudhustad[at]hotmail.com  There might not be more organized cleanups this year. This due to autumn- and winter storms soon setting in, so people run the "risk" of being stranded out there for days at a time. However, it is worth checking out if you want to help out, and Gjertrud can always note down your name and number and give you a call if and when the next clean-up will take place.

We were promised a helicopter to transport the trash to shore, I sure hope that the officials do keep their word in this matter so that it can be transported off before the next storm blows it all back into the ocean! 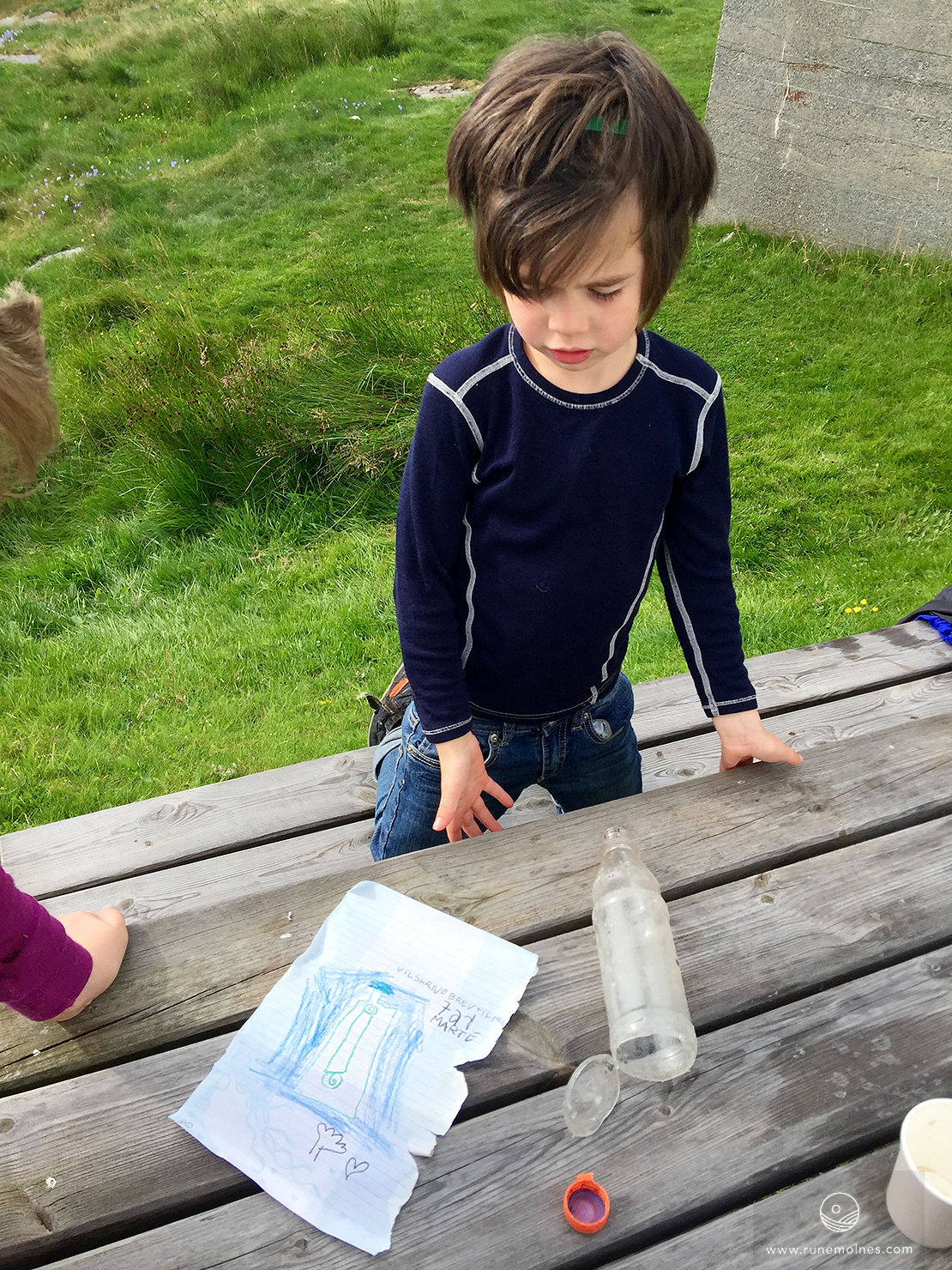 Talk about adventure! We even found a message in a bottle. Could it be a treasure- map? Or a message from a guy stranded on an deserted island? Turned out to be a message from a young girl named "Marte" asking us if we "want to write her a letter". Only too bad that she did not enclose her address ;-) We did get to enjoy her lovely drawing of a message in a bottle though. Ulrik is telling me that the letter smells of old oranges, and all too eager to write her back.. 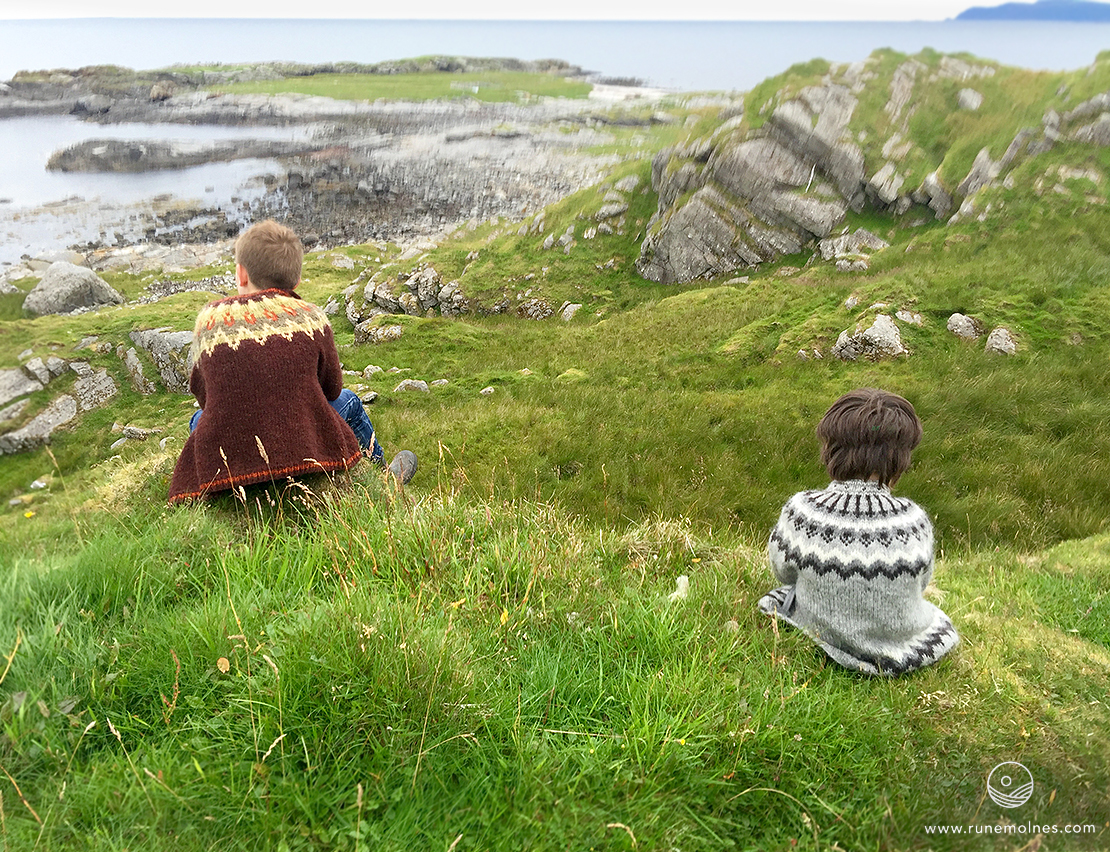 My two boys out exploring the island. Here taking a pause to observe the heard of wild sheep anxiously running away from them. My youngest one insightfully commenting: "..They are probably afraid of us because we are wearing these sweaters made of sheep’s wool". 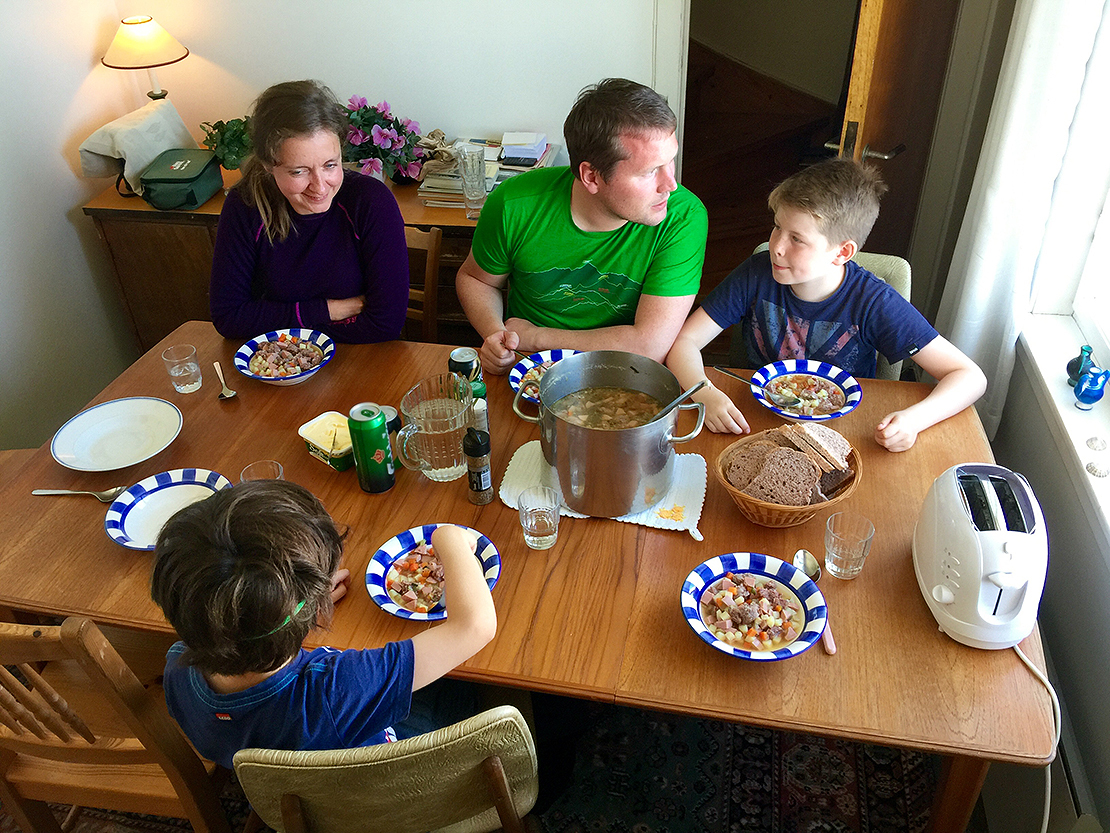 Above (from the left): Gjertrud Hustad, my brother Georg and my two sons enjoying a lovely meal of "brennsnut" in the lighthouse wardens hut after a long day of hard work.

Our short stay at Erkna Island has been nice balance between hard work and enjoying the hospitality and good company of Geir-Egil and his wife. I am sure that this experience will go down as a nice childhood memory for my kids. Not the least they got to experience that yes, they can also make a difference through commitment, awareness and hard work.

UPDATE, 30. Aug. 2016: Geir- Egil just told me that he has received confirmation about helicopter transport. It will take place just a few days from now. Hopefully I will be able to add a picture of the transport here in the journal.

For those in need of a recap: 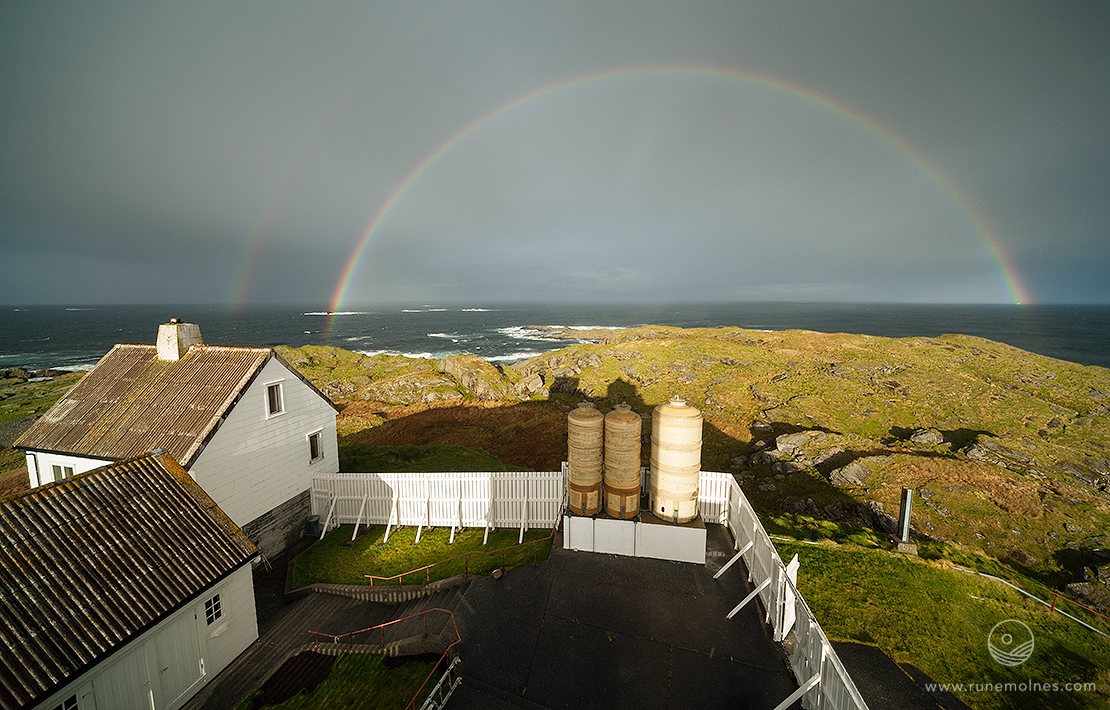 UPDATE, Sept. 13th 2016: Lo and behold! I just received these pics from Geir-Egil, which means that the mountain of litter has been moved to the nearest waste facility on shore :-) 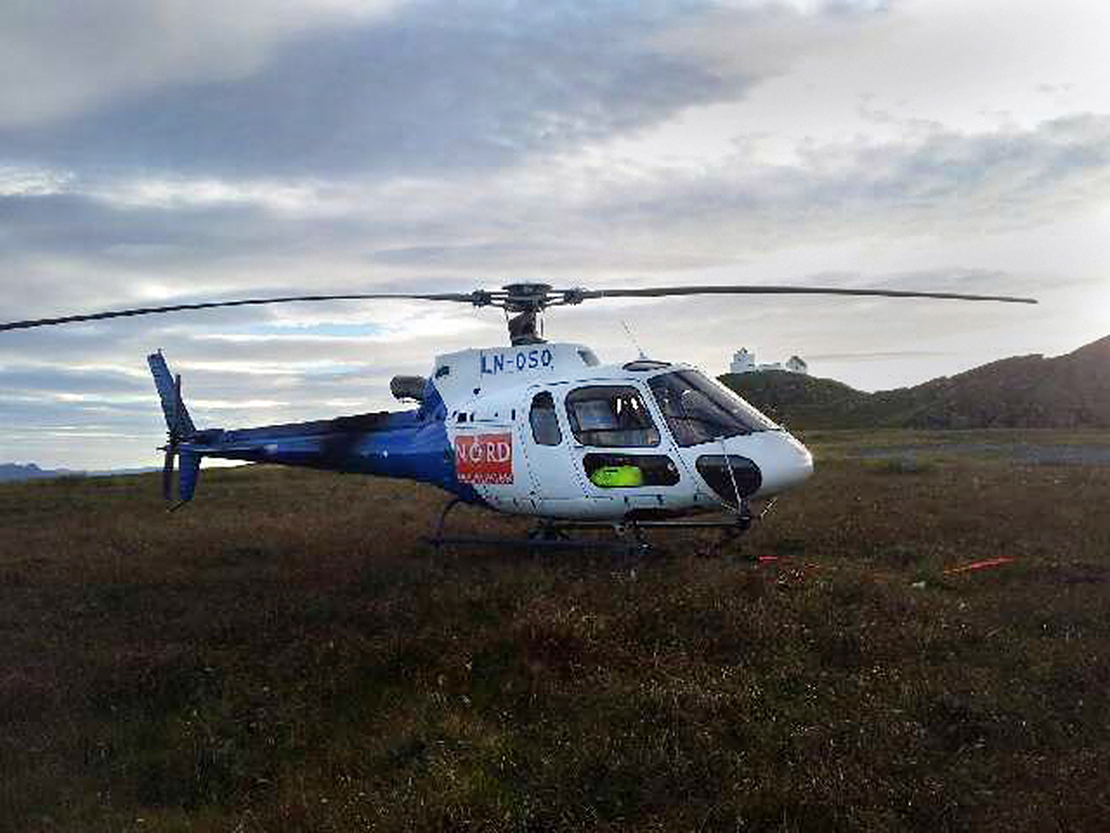 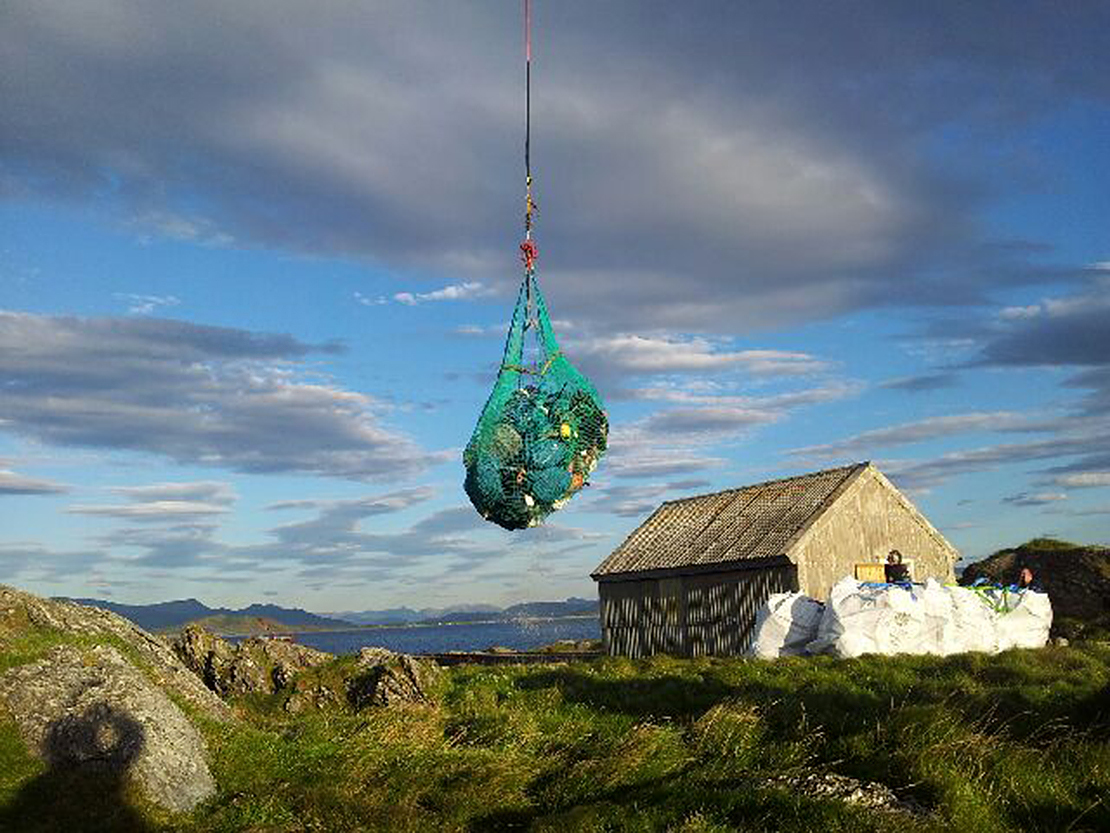 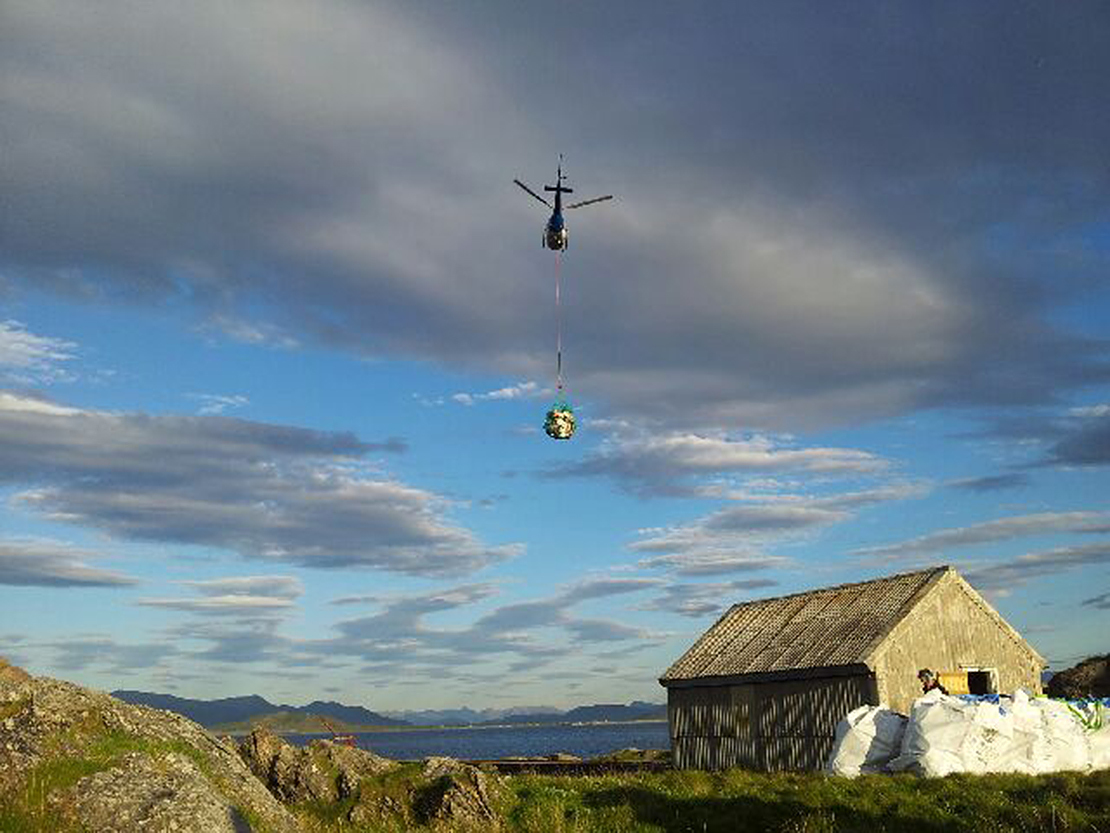 UPDATE, Sept. 19th 2016: The most important thing to focus on is that Erkna Island has been cleaned up. But I must say that it was not in good taste by Geir Leslie Bjørkelund and Giske Jeger & Fiskelag to take credit for the cleanup efforts on Erkna like today’s article in the local newspaper seem to suggest. In addition it seems as though he should read up on microplastics.

Fylkesmannen (the county administration) on the other hand have been neglecting their responsibilities out on Erkna after establishing the bird sanctuary back in 2010. We have been in contact with them on several occasions with regards to funds for a large scale cleanup on Erkna, without any positive response.  In today’s newspaper article one can easily get the impression that this cleanup effort was under the umbrella of Fylkesmannen, which is not the case. The helicopter was a nice gesture, but fact remains that nothing would have been done out on Erkna had it not been for the local volunteers and their independent initiative. 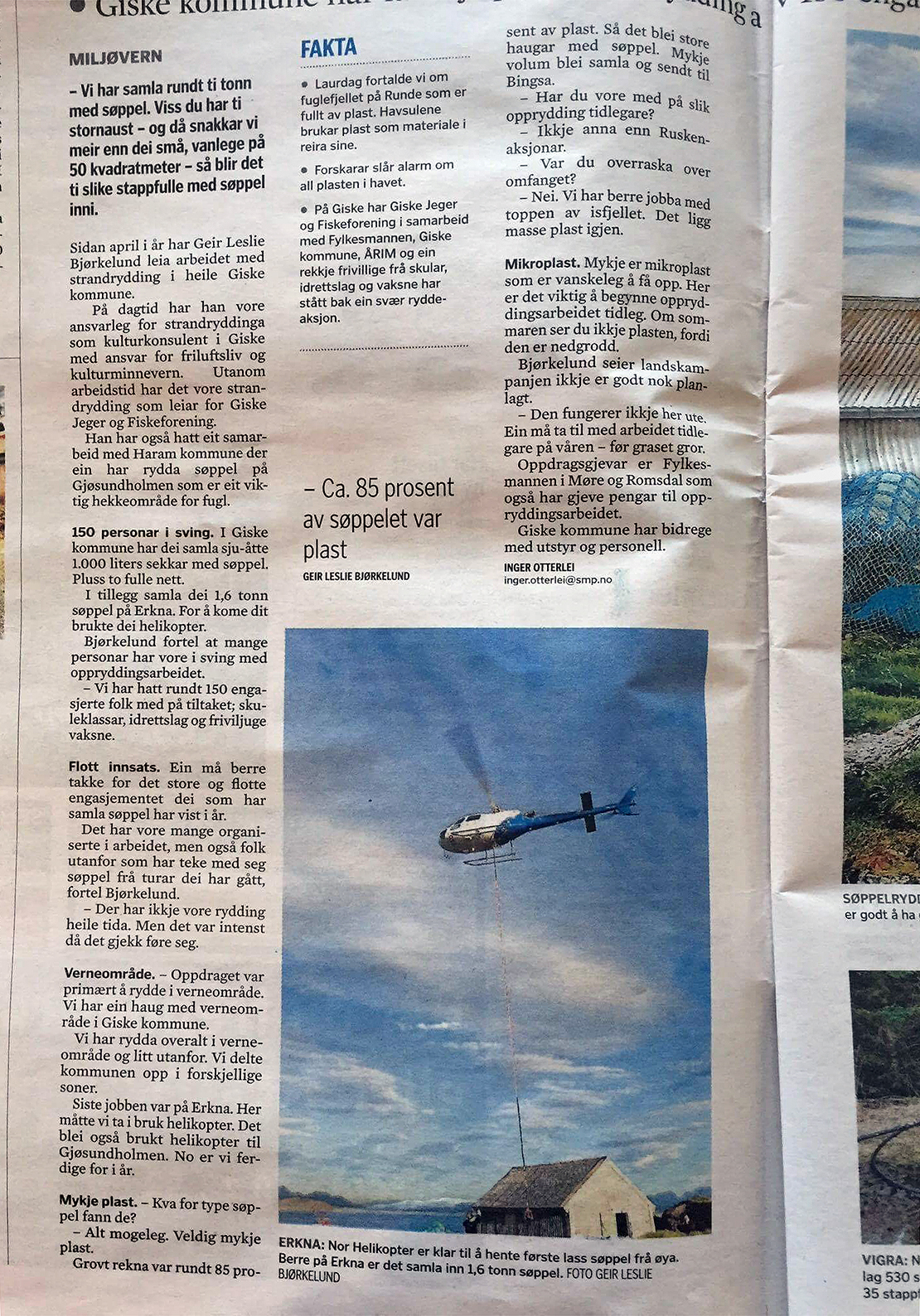